The Market Is Pricing in the Delta Variant Risk

Three years ago, my wife and I packed up our life in New York City and moved to South Florida.

I’ll never forget the drive down. It’s a 17-hour drive without traffic, so we took our time and enjoyed a night in Richmond, Virginia, and Savannah, Georgia.

After three days of travel and with 20 miles left to our destination, we encountered a typical late-summer Florida thunderstorm on Interstate 95.

It was dark, the rain was torrential, and I couldn’t see more than 50 feet in front of me. Lightning strikes were happening all over the place, and our husky-Shiba mix cowered in the back seat.

So, I did what most drivers do in those conditions: I slowed down to 40 mph and put my hazard lights on.

Of course, this is Florida. Not everyone plays by those rules.

After a few minutes, I was passed by a white Jeep Cherokee as if I was standing still.

The driver had decided that even though the rain was torrential and the road was half-flooded, he was still going to exceed the 70 mph speed limit.

As he whizzed by me, the spray from a puddle was like a bucket being dumped on my windshield. A few seconds later, I saw his taillights quivering through the rain.

And then, suddenly, his headlights were facing me as I headed straight toward a head-on collision.

Thankfully, I had slowed down. That gave me ample time to stop without skidding out, as did the rest of traffic.

It was quite a scare, but we made it to our new home unscathed.

When I think of this experience, it reminds me of our current market climate as we brace for COVID-19’s new delta variant…

Reckless Jeep Cherokees in a Rainstorm

In the last few weeks, the indexes have made all-time highs.

However, underneath the surface, investors have sold anything that’s not FAAMG (Facebook, Amazon, Apple, Microsoft and Google). The tech leaders have carried the indexes higher.

As I’m writing this, big-cap tech is now selling off, and the indexes are headed for their worst day since May.

We’ve witnessed an incredible rally since the March 2020 lows, and a round of profit-taking shouldn’t be surprising.

Investors have reasons to be worried. There’s uncertainty around the spread of the delta variant and worries that too many Americans remain unvaccinated.

While I can’t imagine another round of shutdowns, concerns about breakthrough cases might keep even the fully vaccinated from traveling or visiting a local restaurant.

These events may seem like reckless Jeep Cherokees in a rainstorm. But there’s plenty of evidence that the market is ready for what may come.

Insurance for Your Portfolio

To see what the market is discounting, we can look at what institutional investors are willing to pay for insurance on their stock portfolios.

Think of the CBOE Volatility Index (VIX) like a car insurance premium.

When the VIX moves up, it becomes costlier to insure a portfolio of stocks. A higher VIX suggests that investors expect danger ahead.

This is similar to how car insurance premiums move higher if the insurance company sees you live in an area with more car thefts and accidents.

But these insurance premiums don’t tell the full story.

What I care about is how quickly the price of insurance is moving higher. That’s a better indicator of fear.

And to do this, I look at the volatility of volatility, or the VVIX.

When the VVIX spikes, it indicates that the cost to insure the market is quickly moving higher as investors willingly pay higher prices.

And when everyone is reaching to buy insurance at the same time, it indicates that there’s a panic happening.

When people panic, they often act irrationally, such as by overpaying for insurance … or selling stocks at the bottom of the sell-off.

And that’s when strategic buyers can profit from investor panic.

The Best Fear Indicator to Watch

In the past six years, the VVIX has been extraordinarily accurate at forecasting market bottoms. 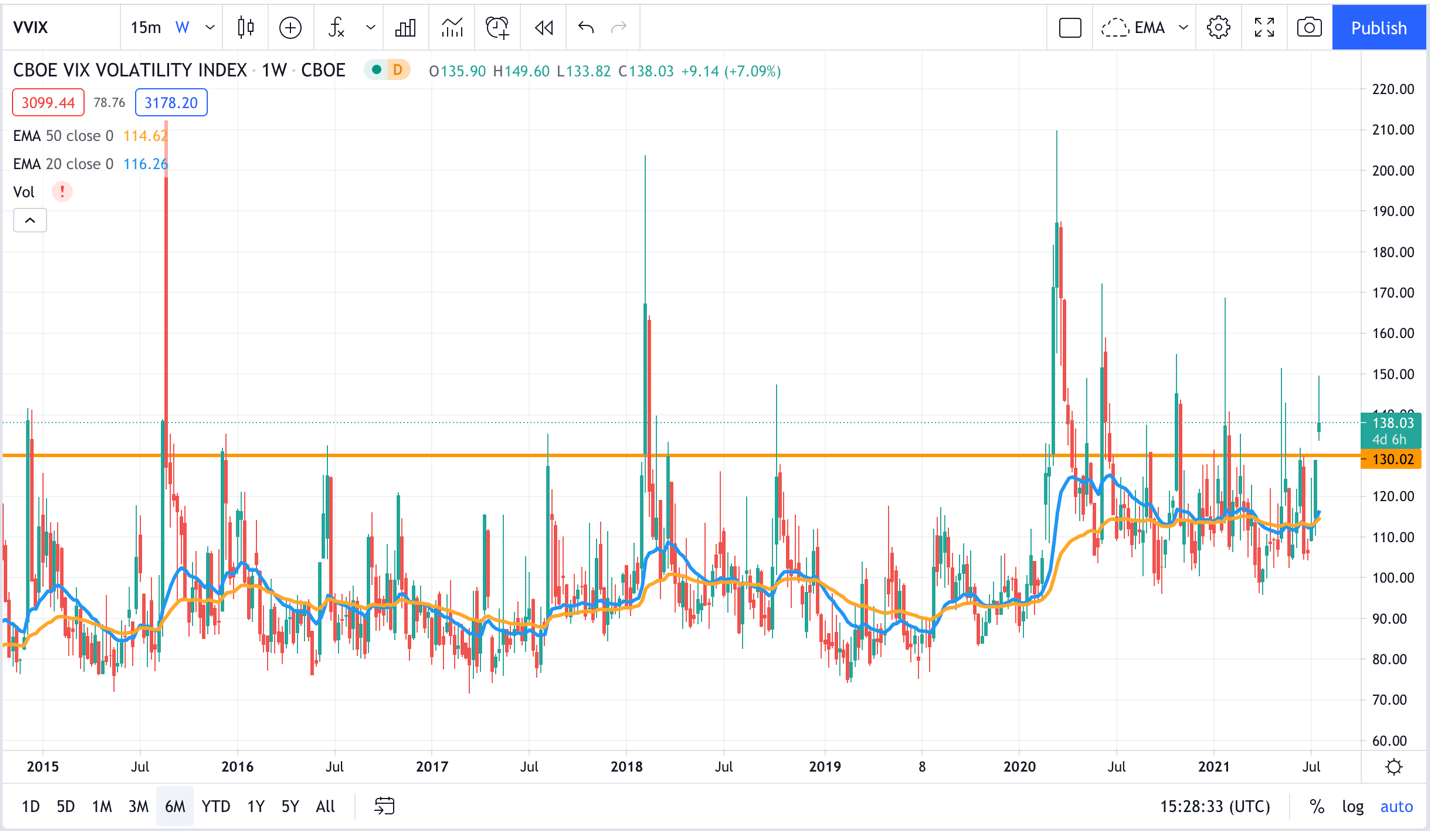 Once again, the VVIX is sprinting higher. It jumped 30% last week, hitting a three-month high of 154 on Wednesday.

While this doesn’t indicate stocks have bottomed, it’s a sign there’s enough fear that investors have tapped the brakes.

This means investors are prepared for a negative event … making it likely we’ll see higher prices three months from now.

But there’s always the chance that there’s not enough time to hit the brakes when you see a careening Jeep Cherokee in a rainstorm.

The Right CEO Could Help You Make Triple-Digit Gains

Space Update: The Biggest Winner? (YOU!)

The Market’s Bizarre Response to the Fed

100,000 People Are Profiting From Ditching Their…