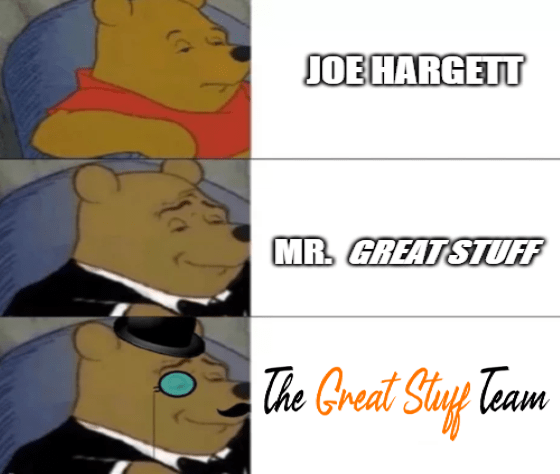 Great Stuff‘s back — tell a friend. Seriously, you’re not hogging this Stuff all on your own, right?

I know, it was only a weekend, but it’s felt like forever since we’ve caught up on the market goodness, Great Ones. Also, if you want to know a secret … I’m not Joe, aka Mr. Great Stuff. Gasp!

The nameless and faceless Great Stuff team is on deck this week, no longer behind the scenes. Joe decided to relish in the summertime sunshine (lol, as if) and head out for vacation. Shocking, isn’t it? Even Mr. Great Stuff himself has to recharge his greatness batteries sometime … or something like that.

You actually hear from us a lot more than you think. So, rest assured: Your dream meme team is still at Great Stuff HQ, holding down the fort here. But suffice it to say, we’re keeping things quick and dirty today … and most of this week. Just the way y’all Great Ones dig … you dig?

Now, you know who else is back (back again)? Earnings season! The time for corporate revenues and earnings to shine is nigh. This week’s slate of reports packs some heavy hitters from across the market, and things are only getting hotter throughout the rest of July.

Here’s the week ahead in earnings, courtesy of the cool cats over at EarningsWhispers on Twitter: 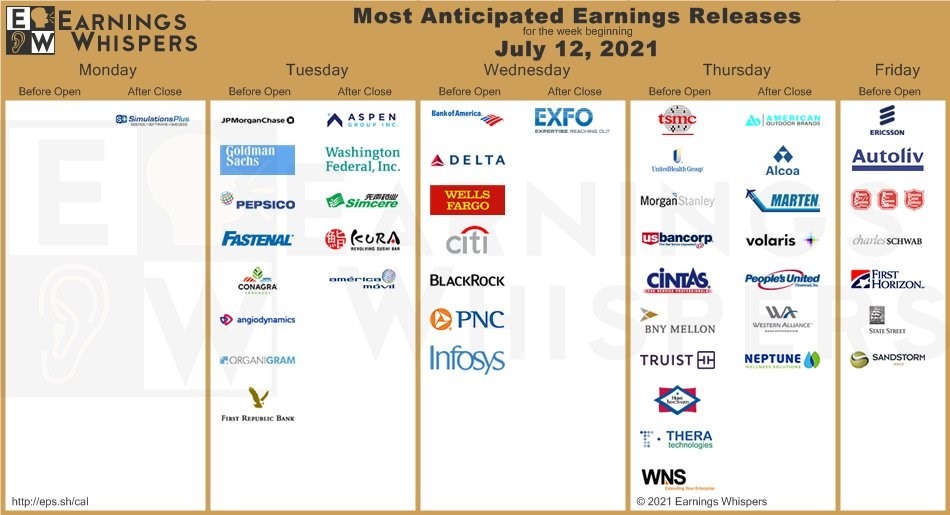 It’s bank week … oh boy. In fact, this week’s earnings lineup is almost a mirror image of the first week of last earnings season. (Go check out April 12’s earnings, play spot the difference and get back to me.)

The who’s-who of the banking milieu will strut their stuff all this week, from the institutional big wigs like BlackRock (NYSE: BLK) and Goldman Sachs (NYSE: GS) to the banking sector’s relatively small fry, like First Republic Bank (NYSE: FRC) and PNC Financial Services (NYSE: PNC).

So, what are we looking for here? With the bank brigade, it’s all about outlook and guidance this time around. I want to know what economic headwinds the banks see for the rest of the year, going into next year. Sure, last quarter’s financial deets are welcome … but the banks usually have as much to say as a post-game sports news conference.

Yes, in our last quarter, we uhh traded a lot … made tons of dough. ‘Twas nice. Next quarter? Yeah, we’re probably going to do it again … try and make more money.

Fascinating as always. Anyway, I’m mainly watching to see which banks talk up their inflation/deflation/reflation concerns. You’ll want to watch which banks are actually concerned about something … and which are just going with the program.

While we’ve not mentioned Cintas (Nasdaq: CTAS) much in these here digital pages, it’s definitely on the watchlist for the week. With Cintas’s role in outfitting and supplying both small and large businesses with uniforms, safety products and cleaning supplies, you’d think that the Great Reopening(TM) would be a boon to the company, what with business owners hiring more staff (or trying to).

But just how much hiring, supplying and perspiring actually made it to the company’s bottom line is for Cintas to tell.

It’s been a rough few quarters (years?) for pot stocks, which is why I eagerly await hearing from Organigram (Nasdaq: OGI) tomorrow. Organigram almost always surprises analysts whenever it hotboxes the earnings confessional, just … never in a positive way.

Just once, I want to hear a pot stock that had blowout earnings or revenue growth or increased its market share — something uplifting from the cannabis sector. “We’ll knock ’em out next quarter!” is almost the pot stock anthem by this point.

Last but definitely not least is Taiwan Semiconductor Manufacturing (NYSE: TSM). When it comes to the dang chip shortage that everyone’s probably going to blame in the coming weeks, TSM is the company you want to pay attention to — this literally is the chipmaker’s chipmaker.

But above all, no matter the sector, we’ll still have to keep in mind that year-over-year comparisons are wonky right now with the pandemic … and Wall Street’s amped-up expectations for storming recovery growth in stocks might already be priced in.

Which reports are you holding out for? Are any of your portfolio companies entering the earnings spotlight this week? Better yet … got any earnings plays in your sights? Share what you’re up to these days: [email protected].

By the way, if you need some trade ideas around earnings … you’re in luck!

If you follow Great Stuff Picks — and who wouldn’t?! — you know we’ve been gung ho about Advanced Micro Devices (Nasdaq: AMD) for years now.

But going into AMD’s earnings on July 27, you have options on how to play the trade. Two options trades, in fact. Click here to see not one but two options strats you can use for AMD before it reports earnings.

But hey, maybe you’re not the type of Great One to mess around with options before the earnings report drops. That’s OK — I won’t hold it against you … this time!

My colleague Chad Shoop created a system that provides trade signals on 75 specific stocks after their earnings report.

They’ve captured far more consistent moves with this system, such as 244% in five days, 175% in eight days and 289% in three months.

It’s an invaluable tool for earnings season, which is just getting started. Learn more right here!

Some People Call Me The Space Cowboy 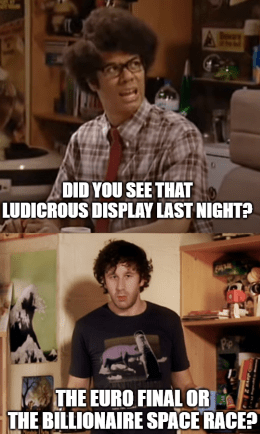 Some people call me Branson, ’cause I speak of the pompatus of love. Wait, that’s not right at all, hang on a sec… Branson is the space cowboy, apparently. The dude took his protein pills, put his helmet on and went to space yesterday, leaving all us Earth-bound peons behind.

The Virgin Galactic (Nasdaq: SPCE) CEO beat Bezos in the race to the great beyond, and just like with every other ballyhoo-fueled event for investor optics, Virgin stock initially took off like a billionaire’s rocket.

That is … until Virgin announced today that it will take advantage of its rally over the past two months to, you guessed it, sell more stock! Up to $500 million worth, all told. While Branson relishes in his space oddity fantasy, SPCE stock fell back down to Earth today, crashing 15%. I guess no public-relations hype bender is complete without the hangover of surprise share dilution.

Editor’s Note: You need to watch this video as soon as you can.

In the first 30 seconds, you’ll discover a little-known technology that’s set to drive the greatest investing mega trend in history.

It’s called “Imperium.” And according to experts, Imperium is set to go from virtually unknown … to having 2 billion users in the next four years, launching a stock market gravy train almost nobody sees coming.

Click here now to discover details of the No. 1 Imperium investment for 2021.

There’s hardly ever this much commotion in the chicken market. Right after we told you about Beyond Meat’s disturbing plans for imitation chicken domination on Friday … my appetite was dashed even further. Tyson Foods (NYSE: TSN) announced a major frozen chicken recall due to a listeria outbreak. Tyson says up to 9 million pounds of chicken may be at risk of contamination.

Since the potentially problematic poultry was produced from December 26, 2020, to April 13 of this year, there’s a good chance many grocery shoppers (and institutions like restaurants, schools, hospitals and military bases) already have tainted chicken in their freezers.

This might be a good chance to remind you to, you know, go check your freezer. (Let me know if your fridge is running, too…) Here are the Tyson products to look for. Tyson stock is down about 2% today as everyone hunts down the contaminated chicken. And while the fallout may be short-lived for TSN shares … I really don’t want any of y’all catching the listeria cooties. 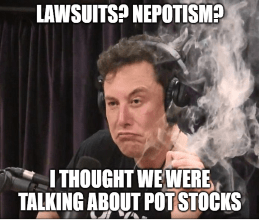 Elon Musk is up on the witness stand today regarding Tesla’s (Nasdaq: TSLA) buyout of SolarCity in 2016. Well, Musk calls it a “buyout” — the plaintiffs would rather call it a “bailout.” SolarCity was founded by Musk’s cousins, and the Tesla CEO owned a 22% stake in the company until Tesla dropped $2.6 billion to acquire the solar panel maker.

According to Elon: “Since it was a stock-for-stock transaction and I owned almost exactly the same percentage of both there was no financial gain.” Tesla shareholders said “nay nay” and sued, alleging that Elon used Tesla’s coffers to bail out his family’s company. Now, if Elon Musk doesn’t convince the trial’s judge that the deal was fair to Tesla shareholders, he may personally have to pay back the billions that Tesla spent on the deal.

I personally won’t speculate one way or another until Elon Musk has his day in court … but really? Are people shocked by the notion that nepotism is alive and well in the public markets? That’s the more surprising story here.

Anyway, what do you think about Tesla’s SolarCity buyout? Do you have strong opinions on *shuffles deck of cards* chicken contamination? And how about that whole “earnings season” shebang?

Feel more than free to rant away, Great Ones. Write to us whenever the market muse calls to you! [email protected] is where you can reach us best.

In the meantime, here’s where you can find our other junk — erm, I mean where check out some more Greatness:

Until next time, stay Great!